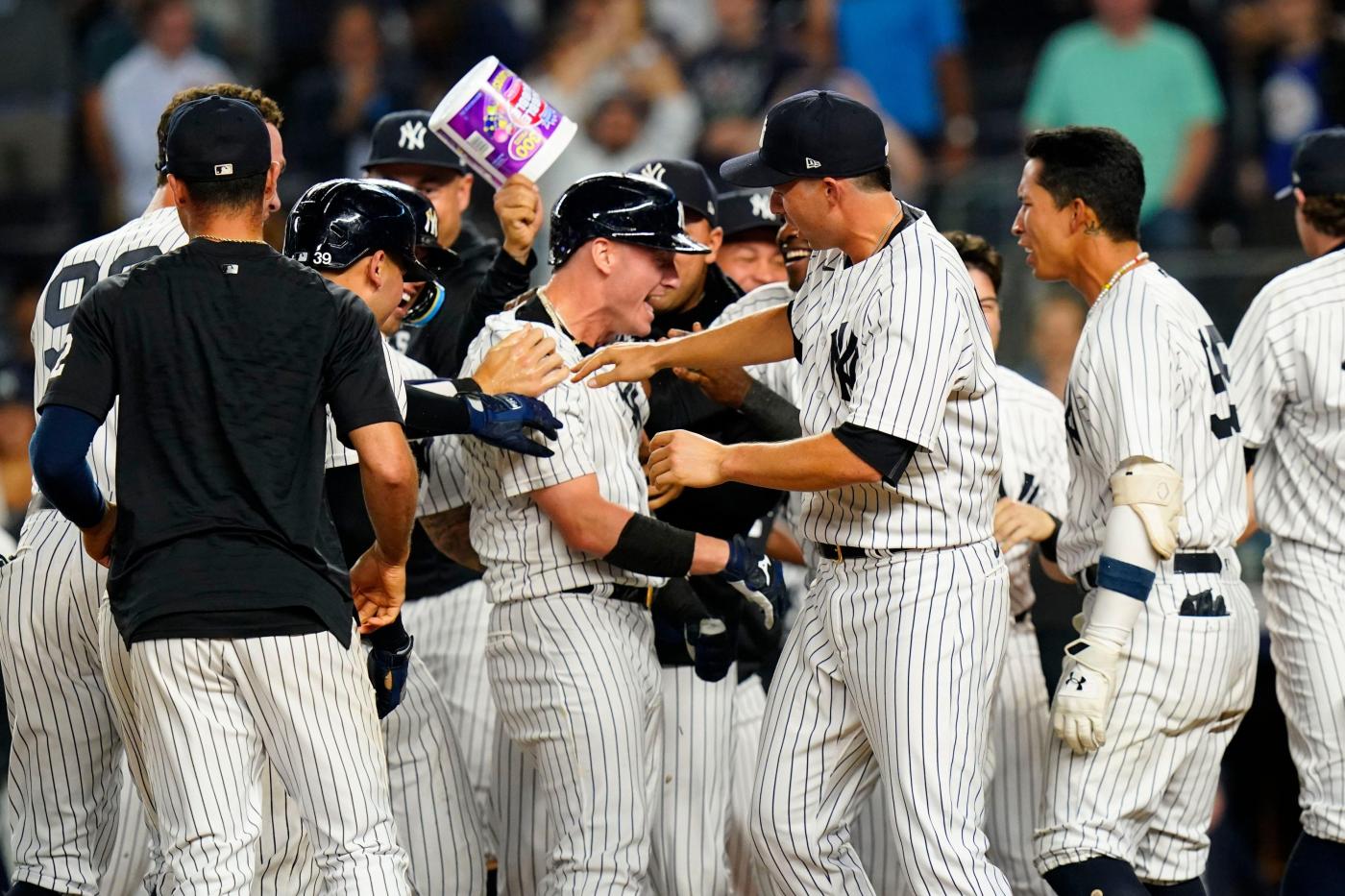 If Wednesday night turns out to really be a turning point in this season, blame it on the rain. The hour and three minute rain delay in the seventh inning of their dramatic come-from-behind win over the Rays, gave the Yankees hitters a chance to reset and when they came back to finish off the game they looked more like the hitters they were earlier in the year.

The difference? It may have been desperation-motivated, but they were looking to get the ball in play. Aaron Boone said that he overheard lots of talk among hitters in the clubhouse during the delay about approaches and what needs to happen.

“There were some really good conversations going on, actually, between some players that I feel like showed itself out there in some approaches,” Boone said. “I won’t get too much into it, but I thought there were some really good conversations that I kind of walked in and out of, that were happening amongst players that showed itself when we came back out there. Those conversations amongst each other sometimes just amongst players are very important.

Any offense was good to see at that point after being shutout in two of the previous four games. It was just the Yankees’ third win in the last 14 games and just their ninth since the All Star Break. The eight runs they scored in the 10-inning win was double the combined offensive output for the four previous games combined.

After the rain delay, Jose Trevino led off with a single and DJ LeMahieu, pinch hitting for Estevan Florial, lined the first pitch he’s seen since Saturday into right field to put the tying run on base. Andrew Benintendi drew a walk and then Pete Fairbanks walked Aaron Judge on four pitches to cut the Rays’ lead to 4-3.

Anthony Rizzo led off the eighth with his 28th home run of the season to tie the game.

In the bottom of the 10th inning, with Aaron Judge as the ghost runner, Gleyber Torres singled and Anthony Rizzo walked  to load the bases. Josh Donaldson, having just seen Jalen Beeks as the Rays opener two days before, hammered a game-winning grand slam.

“I thought coming out of the delay, I just thought, really good two-strike at-bat from Trevino to start, where he gets jammed and kind of goes the other way,” Boone said. “DJ coming off the bench after sitting for a few days and smoking one right away just setting us up in a good spot there.

“In  the extra innings where it’s like, okay, we’re down a few ‘I gotta move this line.’,” Boone continued. “Gleyber shoots one the other way, Rizzo works the walk, and then JD having that kind of same mindset, thinking a little bit the other way, and was able to punch one out. So I just thought those are some examples of what I thought was really good at-bats. That’s what we’re chasing.”

The Yankees lineup has been diminished without the power of Giancarlo Stanton. Rizzo had been 2-for-27 since coming back from missing five games with lower back tightness. The consistency of LeMahieu, who was back in the lineup Thursday after missing four starts with an inflamed big toe, really sets that tone of putting the ball in play.

It also makes the lineup deeper, harder to pitch around and puts hitters in the places where they can better succeed.

“It lengthens it, now I look at Gleyber (Torres) is hitting sixth tonight,” Boone said. “That’s the thing, the length that adds. Obviously, you’re adding another impact player to the lineup and at the top and he’s done such a good job of getting on base this year. And when we’re able to add Giancarlo back that just pushes guys down the lineup just make sure you line up deeper while also adding a wrecking ball in there. So it’s just another great offensive player, but that trickle (down) of that makes the lineup deeper.”