Todays Though > News > Yankees see Jordan Montgomery Saturday, and could be missing him in October – Boston Herald
News

Yankees see Jordan Montgomery Saturday, and could be missing him in October – Boston Herald 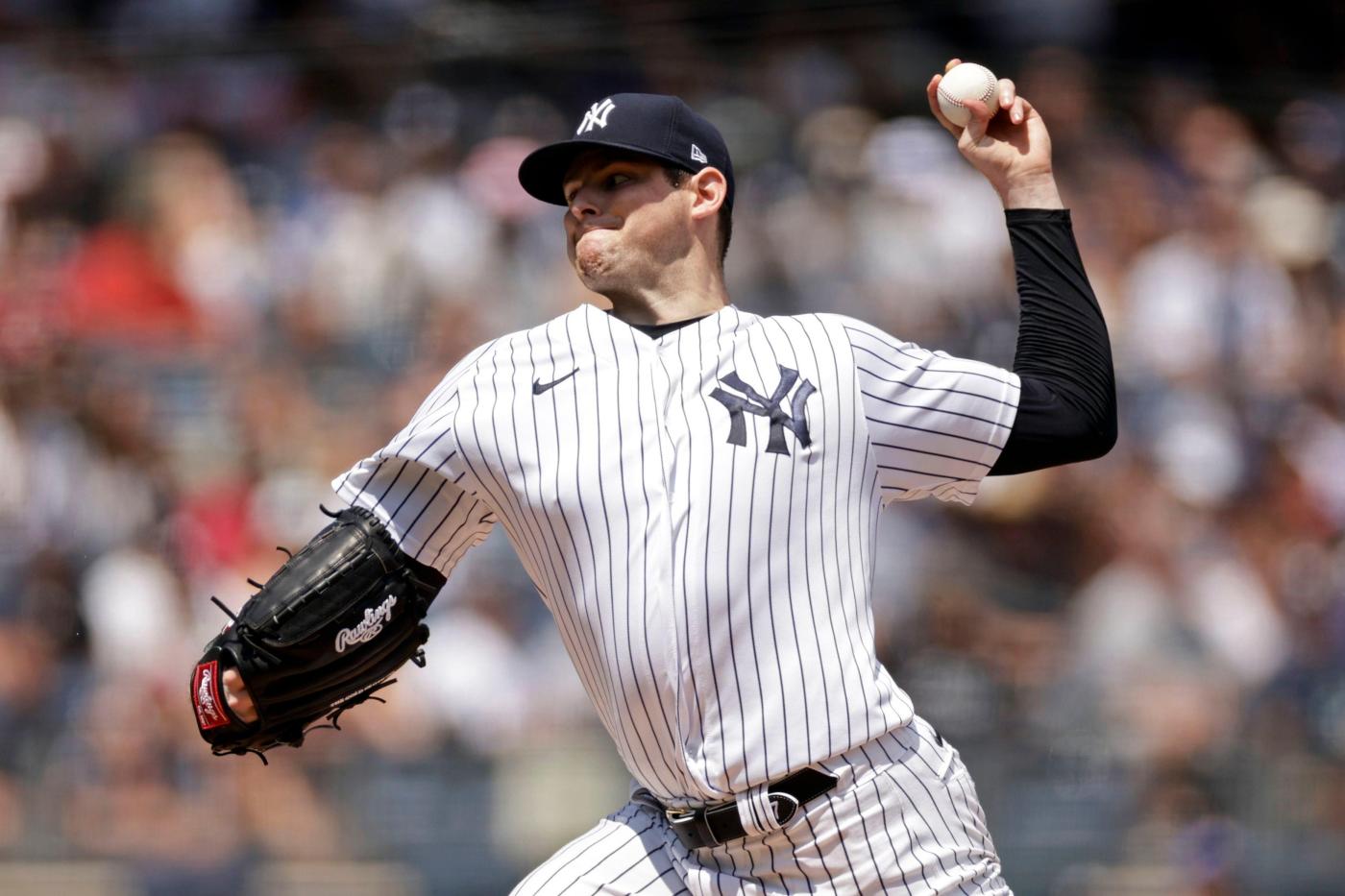 ST. LOUIS — Jordan Montgomery has settled into his new clubhouse quickly. The former Yankees lefty said that Matt Carpenter, who played most of his career here at Busch Stadium, called ahead and made it an easy transition for him, though there is still some shock over the Tuesday night trade.

“I still get a little surprised when I see myself in red,” Montgomery said with a laugh.

But the shock is wearing off and he’s starting to get a grasp on his new reality. While his teammates were effusive in praise for him as he left, GM Brian Cashman indicated that swapping Frankie Montas for Montgomery was an upgrade and indicated pretty clearly that the lefty wasn’t in the Bombers’ postseason plans.

Montgomery shrugged it off on Friday.

“If he thinks that, I don’t care. I mean, obviously I’m in the talks (about the postseason) here,” Montgomery said. “So I’m excited to be wanted. And I’m a Cardinal now. I’ll do my best.”

The Yankees will get a very up-close and personal look at what they gave up on Saturday night when he pitches against his former teammates. In a trade that is still perplexing for how it weakened the Bombers’ pitching depth, they sent Montgomery to St. Louis for Harrison Bader, a tremendous defense center fielder who is on the injured list and in a walking boot for at least another week.

The fact is, however, despite running into a rough stretch his last few outings, Montgomery had been a fairly solid starter for the Yankees. The 29-year-old homegrown lefty pitched to a 3.94 ERA over six seasons in the big leagues. This season, Montgomery was pitching to a 3-3 record because of poor run support and a 3.69 ERA over 114.2 innings. The lefty’s numbers were a little deceptive, however, as his xERA 4.14 indicates some very positive luck.

Dealing Montgomery removed the final piece of the Yankees’ pitching depth insurance. While the Yankees made it clear they felt like they could trade Montgomery because he would not be in their postseason rotation after they acquired Frankie Montas, it leaves them with a rotation already showing signs of wear.

Jameson Taillon, who has a considerable history of injury, is struggling. Luis Severino is being slow-walked back from the injured list, perhaps because of his history of injuries. Gerrit Cole just has not been the stopper the Yankees need in big games. Nestor Cortes has been the Bombers’ most consistent and reliable starter of the season, but he’s pushing into an amount of innings pitched that’s brand new for him. The trade deadline saw the Bombers send away their top tier of pitching prospects, leaving just Domingo German and Clarke Schmidt if anything happens. While Schmidt lengthens himself out in Triple-A, the Bombers are going to run out German and his 6.39 ERA.

Many in the industry have been wondering if the Yankees were trying to flip Bader for another front-end starter and the second part of the deal fell through. Thursday, speaking on two New York radio shows, GM Brian Cashman was adamant that the Montgomery trade for Bader was a straight-up deal and not part of a bigger, multi-inning deal that fell through at the last minute.

Bader, a New York native who went to Riverdale’s Horace Mann High School, could be a very specific weapon in the playoffs.

When healthy, which is expected to be in September, Bader could slide into a regular rotation in the outfield, allowing Giancarlo Stanton, who will also be coming off the injured list at some point, to DH for a while to ease back. He can be used when they want to get Aaron Judge off his feet.

But Bader wasn’t brought in for September; it’s strictly about the playoffs

And he should be used regularly late in postseason games. He is obviously the best defensive choice in centerfield and should be playing the final innings there. Bader’s speed is ranked among the top 94th percentile, meaning his speed makes him a threat to steal a base. That can be huge in close playoff games when getting into scoring position or beating a throw home can be the difference between advancing or heading home early.

MEET ME IN ST. LOUIE

Frankie Montas will fly in from Arizona and meet the Yankees in St. Louis on Saturday morning. The right-hander, whom the Yankees acquired from the A’s Monday, is scheduled to make his Yankee debut on Sunday.

He has been on the bereavement list and with family after the death of his mother-in-law.

Montas, who last started on July 26, threw a bullpen Wednesday.

“Fortunately, he’s in Arizona, where he lives and he’s got some pretty good setups there as far as places that he could throw, and so he had a 35-pitch bullpen the other day where he was able to get after it,” Boone said. “We were able to have some eyeballs on and things like that and then had his catchplay yesterday and today so we’ve been able to keep tabs on and communicate with him so I feel like we should be in a pretty good spot.”

Zack Britton faced live hitters for the first time since having elbow reconstruction surgery on Thursday. Boone said the reports were good.

“Yeah, 14 pitches good. I actually talked to him yesterday and he was really excited about it,” Boone said. “I watched it. It looked good. The sinker profile looks really good. Perhaps as big as anything I think the next day he felt really good, felt strong. So I think he’s got another bullpen this weekend and I think he’s got another live session in the middle of next week.”Britton, 34, is still considered an option late next month, but the Yankees have avoided putting a specific timeline on it. Britton is in the final year of his deal with the Yankees.

Giancarlo Stanton continued to ramp up his baseball activities on Friday.

“He’s still more baseball today. I think he hit off the machine yesterday,” Stanton said. “He did some light running and was doing the same thing today. So he’s making progress.”Stanton went on the injured list with left Achilles tendinitis July 26.

Anthony Rizzo was scratched from the Yankees lineup against the Cardinals about 45 minutes before the first pitch at Busch Stadium Friday night. The team offered no update for the changed lineup.

The first baseman missed four games last month with back spasms, which he said he had in the past, usually a once a season issue.