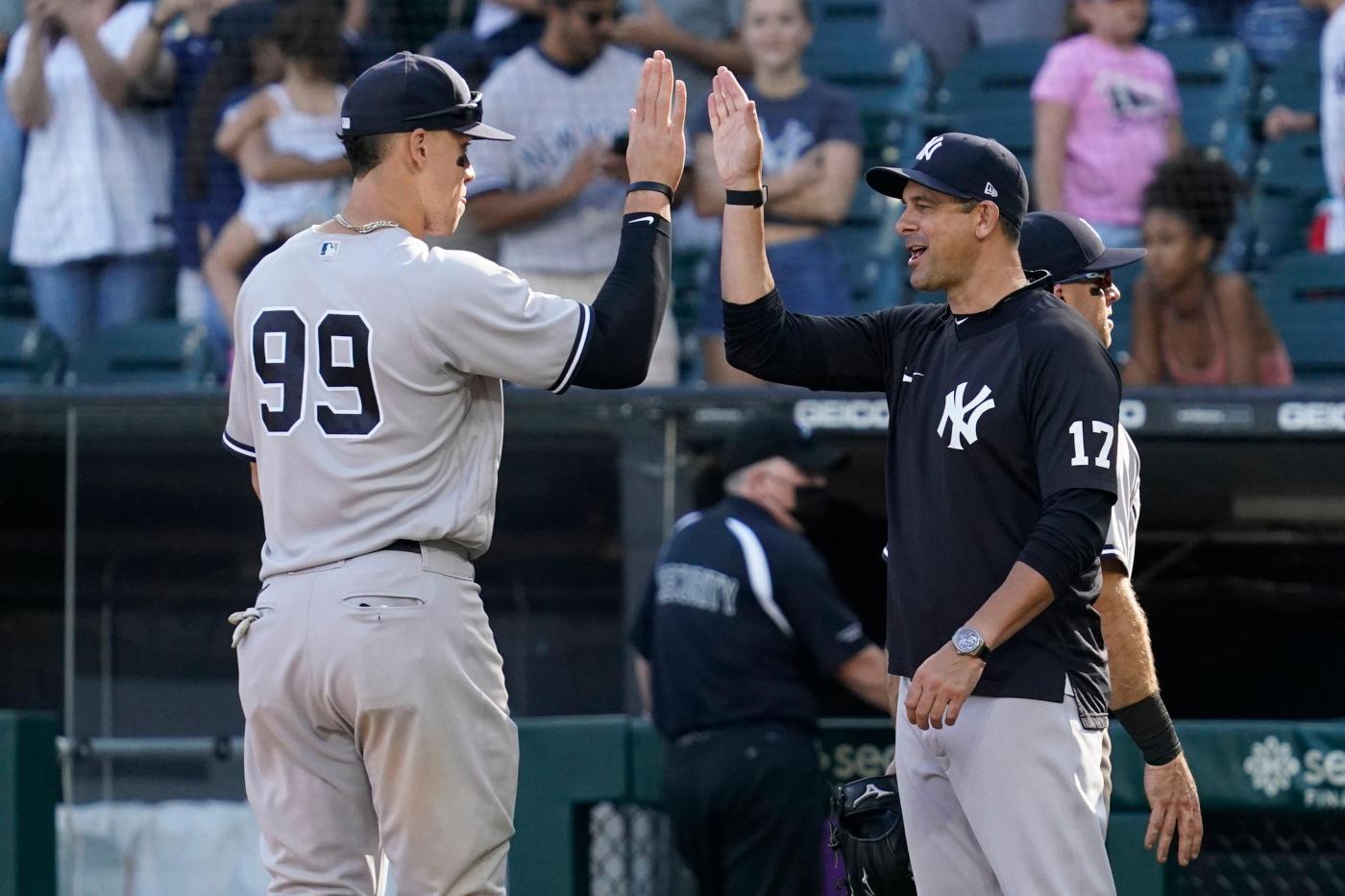 SAN DIEGO — Aaron Boone went to sleep late Tuesday night in his downtown San Diego hotel room unsure of whether or not the face of the Yankees would remain a Yankee. He woke up to a text message from a friend informing him that Aaron Judge had chosen to stay with the Yankees.

His friend had apparently seen the news on Twitter and after the Arson Judge debacle and all that followed on Tuesday, the manager wasn’t taking any chances.

He called general manager Brian Cashman, who did not have the luxury of a nap like Boone did.

“I didn’t have any sleep,” Cashman said Wednesday morning from a conference room inside the Grand Hyatt San Diego on the final day of the winter meetings.

Although Cashman cannot formally confirm the deal just yet, it’s all but done: The AL home run record holder will remain in pinstripes for the next nine years at $360 million.

“I’m restricted of what I can and can’t say because of the nuances of my job, but I feel like Hal Steinbrenner has put us in good position to try to finish things off,” Cashman. “There are no guarantees with that, but I feel like last night, a lot of progress was made and we’re optimistic. So hopefully, we will be at a point sometime in the future to put some meat on the bones on what is, certainly, a pretty strong national baseball story right now.”

The Yankees put the full-court press on to attempt to woo Judge back to the Bronx early on in free agency, and while in the end, the efforts paid off, it was not an easy process. The club was caught off guard several times throughout the process, culminating in a roller coaster of a week in San Diego at the winter meetings.

In an interview with TIME Magazine, Judge expressed anger over how the Yankees’ decision to make their spring offer to him public. The article was published Tuesday, shortly before it was reported that he had chosen the San Francisco Giants. The report was incorrect, but chaos ensued.

Then, Judge made a surprise trip to San Diego on Tuesday night to meet with a surprise team that jumped into the bidding war late: The hometown Padres.

“Yesterday was a long, rough day in a lot of ways,” Boone said.

The Yankees didn’t even know the Padres were a contender. Cashman and his staff were reading media reports and finding out information on Twitter along with every other baseball fan. Boone said he had a pit in his stomach all day. Cashman, who proudly noted a strong stomach, was in touch with Steinbrenner and Judge’s agent, Page Odle, throughout the day and late into the night, continually emphasizing and re-emphasizing the message: The Yankees feel their homegrown outfield star will someday be enshrined in monument park along with the other historic greats who helped the team win World Series championships.

This wasn’t an easy task. They didn’t have anything flashy and new to sell him on, other than the goal of winning a World Series. The Giants had proximity to his hometown in Northern California and they brought in Stephen Curry to try and recruit him.

The Padres reportedly offered a boatload of money over 10 years — $400 million, to be exact.

“The host teams of a free agent are at a little bit of a disadvantage because the opposing teams are doing these massive recruiting introductions,” Cashman said. “They’re rolling out the red carpet and bringing in a lot of people, like celebrities from other sports that I read about. We can’t match that.

Cashman can sell a first-class operation and the chance to continue to make history.

It was a wild week, but in the end, the Bronx didn’t burn. Judge, the MVP who thrilled the sports world with 62 home runs last season, decided to remain a Yankee.