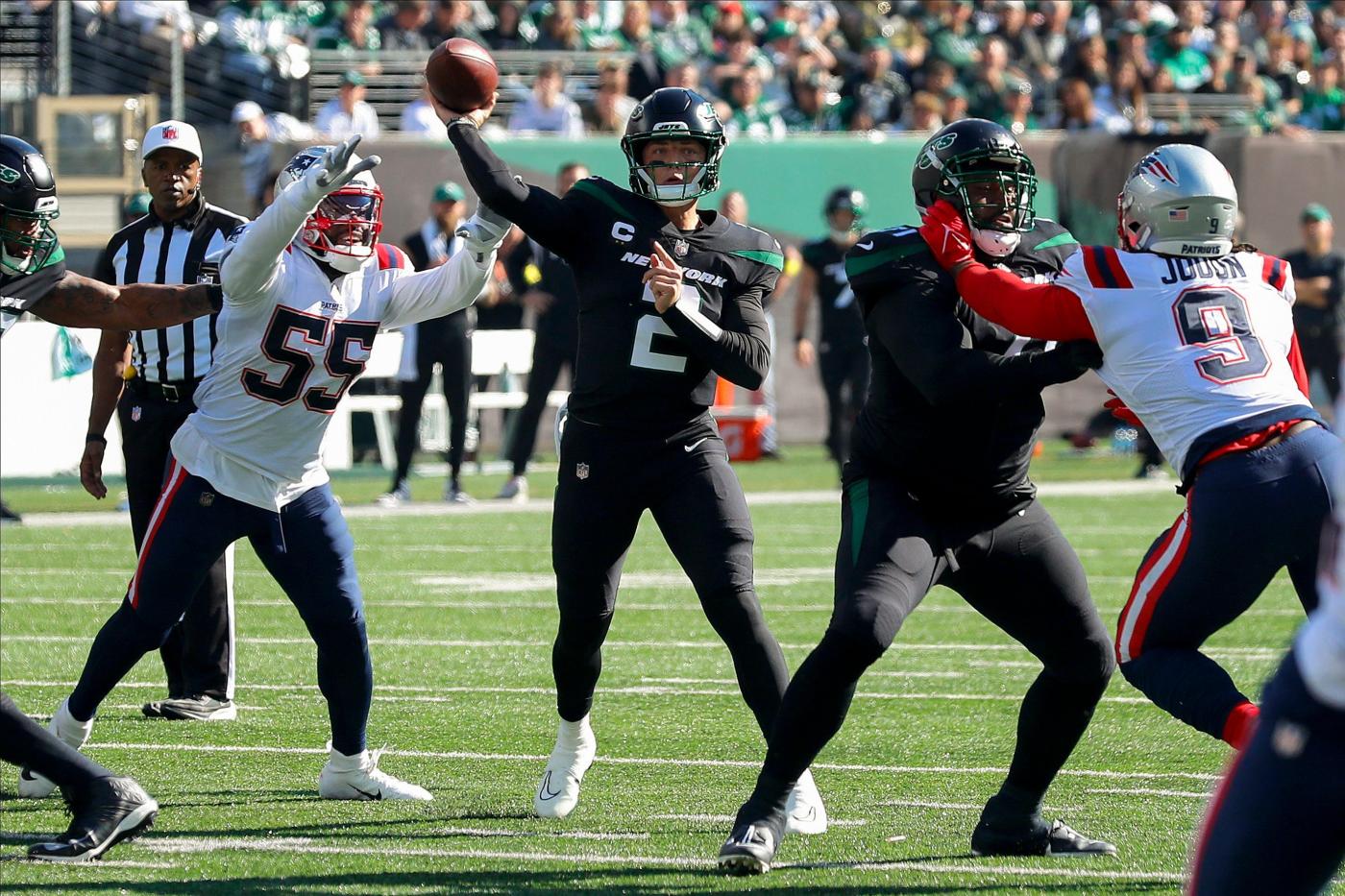 Weeks after snapping their 12-game losing streak to AFC East opponents, the Jets were trying to end another streak against the rival Patriots.

New England has defeated Gang Green 12 straight times dating back to 2015. The Patriots extended the streak to 13 as it was a terrible day for the Jets offense.

After not turning the ball over for three consecutive weeks, Zach Wilson had a Sunday to forget. He completed 20 of 41 passes for 355 yards, two touchdowns and three interceptions.

In his first game in a Jets uniform, James Robinson had 17 yards on five carries. The Jets without running back Breece Hall (torn ACL) only mustard up 51 rushing yards as they averaged 3.4 yards per attempt.

Wilson made a number of boneheaded decisions including a pass he appeared to be throwing away but Patriots safety Devin McCourty picked it off near the sideline. Then his third interception also went to McCourty as that set up a Nick Folk field goal.

While the Jets defense did their part in holding the Patriots offense to just six points at halftime, Wilson’s decision making hurt the Jets all around. His two second half interceptions put Gang Green’s defense in bad situations as the Patriots were able to generate points with a short field.

With no Hall due to season-ending injuries, the Jets weren’t able to rely on the rushing game, which led them to five victories this year. Because of that, Wilson had to throw the ball more and the end result was more turnovers.

After both teams went three and out on their first offensive drives, the Jets got on the board first with a 28-yard field goal by Greg Zuerlein. The play was set up by Wilson’s 54-yard pass to Garrett Wilson.

At the end of the first quarter, the Patriots tied the game up at 3-3 after Folk’s 31-yard field goal.

With 12 minutes left in the second quarter, Gang Green found the end zone for the first time. Wilson completed an 8-yard touchdown pass to Tyler Conklin. The Jets took a 10-3 lead following a 6-play, 75-yard drive.

The Patriots appeared like they were set to tie the game as they got to midfield. But a deflection by Bryce Huff allowed Michael Carter II to pick off Mac Jones’ pass at the Jets’ 24 yard-line. However, the Jets couldn’t do anything with the turnover as they punted the ball after three plays.

Before halftime, Jones threw a pick-6 to Carter II. However, a roughing the passer call on John Franklin-Myers negated the interception and points. New England settled for a 42-yard field goal by Folk that cut its deficit to 10-6 at halftime.

Following the break, the Patriots offense clearly made some adjustments because their offense was clicking on the first drive of the second half. Rhamondre Stevenson started the third quarter with a 35-yard run, which put New England in enemy territory. Then five plays later, Jones found Jakobi Meyers for a 5-yard touchdown that gave the Patriots a 13-10 advantage.

The Jets appeared they were poised to at least tie the game up, but Zuerlein missed a 45-yard field goal. New England turned that into points as Folk’s 49-yard field goal extended its lead to 16-10.

Gang Green appeared to have left its energy in the locker room at halftime because all the momentum was on the New England side. After beginning their next drive on their 17, the Jets offense continued to be out of sync as they punted after three plays.

The Jets needed some fourth quarter magic like they’ve exhibited earlier this year but it was not meant to be. Gang Green couldn’t score any second half points as Belichick didn’t allow the Jets rushing attack to beat the Patriots.

Wilson completed a 63-yard pass to Denzel Mims. That got the Jets into New England territory, which led to a Conklin 9-yard touchdown pass that cut the Jets deficit to 22-17. But their onside kick failed as the Patriots ran the clock out for the win.